Overview: Pedagogy, History, and Design of the Practicals 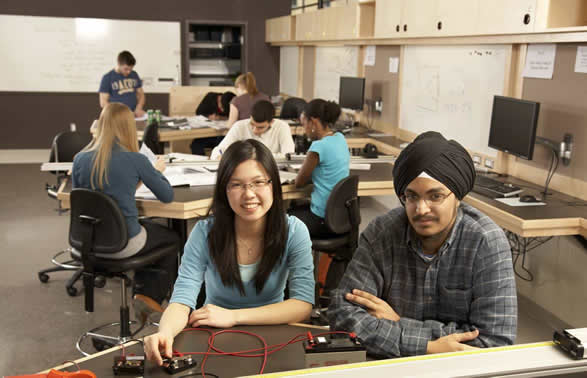 The Physics Practicals implement the results of this research.

Our largest first-year course has about 1,000 students. Formerly, students had 2 one-hour classes and 1 one-hour tutorial (aka "recitation session") per week. They also had a three-hour laboratory every second week. The Practicals combine the tutorials and laboratories into a single Physics Practical which meets for two hours every week. We have kept our traditional classes.

Students work in teams of four. As enrollments shift and some students drop the course, some re-organisation of the teams is necessary. We never have teams with less than three or greater than four students. In addition, half way through each term we shuffle the teams.

Each team has three designated roles:

We have constructed learning spaces which have an important role in achieving the sort of learning which we believe is most important. 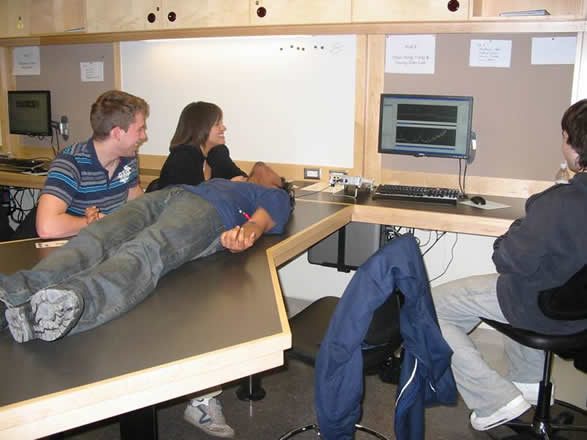 At the University of Toronto we have been using active learning models in our Physics courses for some years. These include Peer Instruction, conceptually based Activities such as various Student Workbooks, etc. Design of the Physics Practicals began in 2005. Construction of our first room occured during the Fall of 2007, and the room was used for a Pilot from January - April 2008 and again from September - December 2008. Construction of two more rooms occured during the Fall of 2008, and in January 2009 we did a full "roll out" and dropped our conventional laboratory and tutorials. In 2015 we "Practicalised" our 150-student first year physics course intended for physics majors and specialists.Two more rooms opened in September 2017.

We have prepared two brochures describing the Physics Practicals, which may be accessed via the blue buttons below. They are both in pdf format and will open in a new tab/window.

Many people participated in the design and implementation of the Physics Practicals.

The origins of the project was a memorandum by David M. Harrison and Ruxandra M. Serbanescu in 2005.

To the extent that there was a "lead" on this project, it was probably David M. Harrison.

Others who developed the Modules include Jason J.B. Harlow and Kimberly Strong.

Hardware and software was developed by our Physics Undergraduate Technical Services technologists.

Many colleagues in the Department of Physics provided invaluable advice.

Early versions of many materials were tested by undergraduate students Chritos Josephides and Andrew Zasowski. Before the full "roll out" in January 2009 we ran two Pilot Programs staffed by Learning Assistants (aka "Teaching Assistants") Peter Hitchcock, Antony Chen and Catherine Robin.

We were supported by the Department of Physics, the Faculty of Arts & Science, the University of Toronto, and the Province of Ontario. 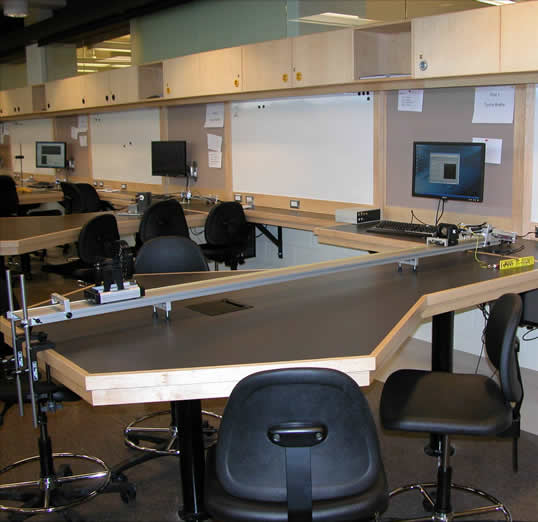 We have designed Pods as a collaborative workspace. Teams of four students work at each pod.

As can be seen, each Pod consists of a hexagonal table with a rectangular section to the wall. Each Pod has:

The height of the tabletop is 92 cm. This allows students to work while seated or standing, and is also a good height for the Learning Assistants to lean on while discussing with the students.

Two of our Pods are on hydraulic lifts, so may be lowered for students in wheelcharis.

Among the design constraints is that the Practicals must be neutral in terms of Learning Assistant resources compared to the old laboratory/tutorial structure. This dictated that we have nine Pods in each room. We think that given sufficient resources, eight Pods per room is the ideal number. In addition to the Pods, each room has:

We worked very closely with our architects to control sound levels. When in operation the room sounds like a busy restaurant: conversations between students at a Pod are easy but there is an underlying buzz.

We also worked very hard on lighting with multiple controls.

About the Importance of Architecture

We have been learning that the design of the Practicals Rooms is vital in achieving the types of learning that we desire. Here is an analogy.

You are hungry, and go into a restaurant. How do you get something to eat? If the restaurant looks like the one to the right the architecture tells you that to get something to eat you:

Note that we get this message even it we don't know the language. If instead, when you go into the restaurant and see something like shown to the left, the architecture tells you that to get something to eat you:

You may have experienced going into a restaurant where the architecture sends mixed signals. This is particularly common for ethnic restaurants.

As already mentioned, there is a projector and screen at the front of the room. The monitor at the Learning Assistant station is a tablet, so that normal handwriting can be used and displayed.

We have a hand-held wireless microphone in each room. These are often used by a Team when they are explaining to their classmates how they solved a problem. This microphone turns out to be useful for many forms of group discussion.

There is also a microphone fixed on the Learning Assistant station.

As mentioned, part of every session usually includes a question and answer session. When students do not bring up questions, we present them with problems to work on.

Here is the hardware and software that has been discussed:

There is off the shelf commercial software for data acquistion, process control, and data analysis. Two of the best known are DataStudio from Pasco and LabQuest from Vernier. However these excellent software products are not a good match to our requirements, largely because many of the details are hidden "under the hood" and not easily accessible to us or our students. Therefore, with some reluctance, we are developing our own software. Our software is based on LabVIEW and SignalExpress; both of these are from National Instruments. In this section we provide access to the software that we have been developing.

At present, each LabVIEW program is "stand alone" and the zip file includes all necessary SubVI's. As we learn more about which SubVI's are required by a substantial number of programs, it is likely that we will begin building common libraries.

The main VI is configured to:

This makes the VI easy for our students to use, but impossible to edit unless one stops the program with the Abort button instead of the Stop button on the front panel.

All software is Copyright © 2007 - 2009 The University of Toronto Physics Practicals. The software is open source and licensed under a Creative Commons Licence. 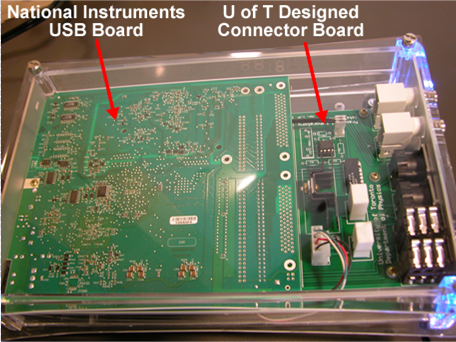 Originally we intended to use commercial data acquisition (DAQ) hardware, such as Science Workshopfrom Pasco. However we found that there were performance issues in using these DAQs with our LabVIEWand SignalExpress software. So, again with some reluctance, we have designed our own DAQ, based on a National Instruments USB -6251 OEM board.

Among the features of our Data Acquistion Device are: 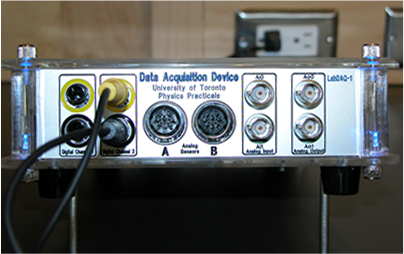 The inputs and outputs are compatible with sensors from a large number of vendors, including force sensors and motion detectors from Pasco.

The principle developer of the U of T Data Acquisition Device was Larry Avramidis of the Department of Physics. The device was a finalist for the Graphical System Design Achievement Award by National Instruments in 2008.