This manual describes the Force Sensor hardware and the locally written software that interfaces to it. Our detectors are the Economy Force Sensor (Pasco CI-6746). It contains a strain gauge which generates a voltage when a force is applied to the receptacle that in the figure has the detachable hook screwed into it. The voltage is output to the 8-pin DIN plug which is typically connected to the U of T Data Acquisition Device, which in turn is connected to a PC running LabVIEW. The voltage that is generated ranges between -8 volts and +8 volts for forces between -50 N and +50 N.

The manufacturer quotes a sensitivity of 0.03 N, which we usually take to be the uncertainty in the measured force.

The voltage generated by the sensor tends to drift. Periodically be sure to have zero force applied to the sensor and press the TARE button.

In research laboratories the standard software for data acquisition and process control is LabVIEW from National Instruments. The software for the Force Sensor was locally developed using LabVIEW. Such programs are called virtual instruments or more usually just vi’s.

We have developed three different vi’s for the Force Sensors:

All three vi’s sample the force 100 times a second.

Here is a screen shot of he Force Sensor vi. 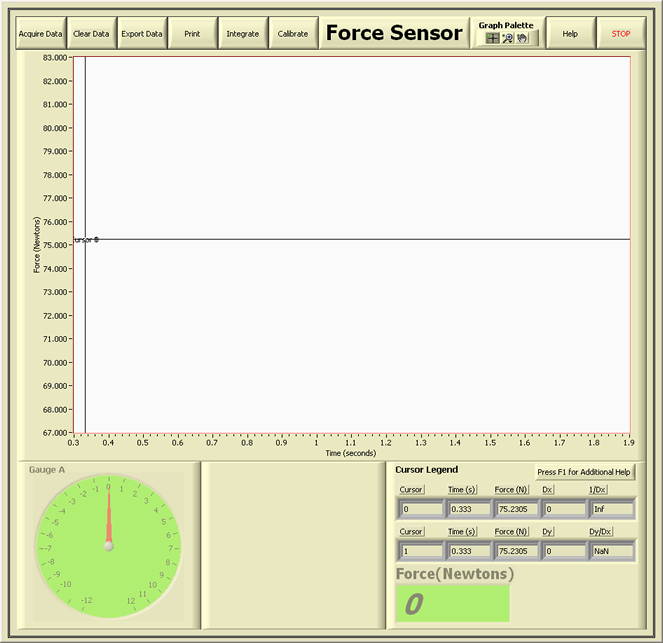 Along the top left part of the front panel are a row of buttons. From left to right they are:

Along the top right of the front panel are three buttons:

The central area of the front panel is a plot of the force versus time. Further information on working with the graph appears below in the Working With Graphs and Cursors section. At that time we will also discuss the Cursor Legend area in the lower right of the front panel.

Working With Graphs and Cursors

When the program starts, there are two cursors, called Cursor 0 and Cursor 1, located to the left of the force-time plot. Towards the upper right part of the front panel is a Graph Palette control. There are three possible functions, and the left-most one allows you to move the cursors by dragging them with the mouse. The selected function is gray. The figure to the right shows the palette when it is set so you may move the cursors with the mouse.

The middle function of the Graph Palette is the zoom tool, and the right one allows you to move the plot with the mouse. 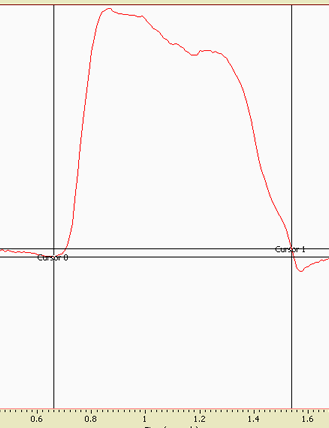 Here is part of a force-time plot with the cursors selecting a region of the data.

Each cursor consists of a vertical and a horizontal line which intersect on the data curve.

By default, the scale of the axes of the plot shows all the data. You may change the scale of an axis by choosing a value on the far left or far right of the axis label, double clicking it, typing in the new value and pressing Enter. 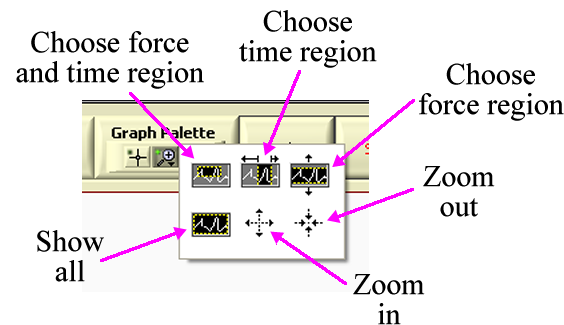 If you click on the zoom tool, the middle of the three buttons in the graph palette, a drop-down menu appears as shown to the right.  The two most used of the items in the menu are:

The other functions are:

The Area Under the Curve

The Integrate button on the front panel calculates the area under the force-time plot between the two cursors. The result is displayed in the area at the bottom and in the centre of the front panel.

The integrate function is fairly simple. Assume we have N time-force pairs:

Then the area under the curve is calculated as

However, there is a subtly to the calculation. Say we have data that looks like the following figure. 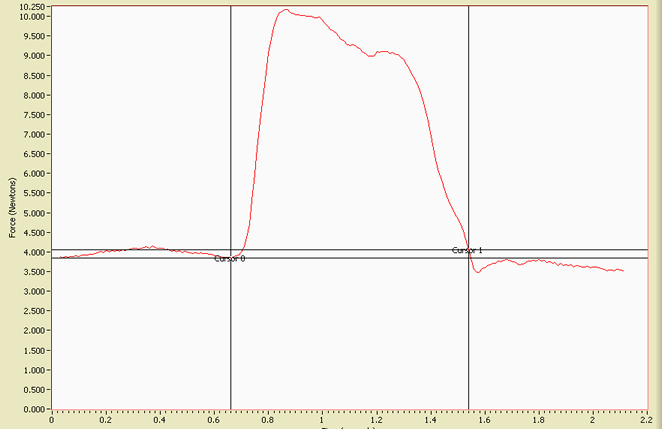 There appears to be a background force of about 4 N, and between 0.66 and 1.54 seconds there is a pulse. Typically we wish to subtract the background from the pulse. Thus the values of the force used to calculate the area has the value for Cursor 0 subtracted from them. Thus the calculated area under the curve is for the region between the cursors and above the horizontal line of Cursor 0.

This vi has two gauges and numerical readouts for the forces. The labels on the gauges and readouts correspond to the Analog Input channel on the U of T Data Acquisition Device to which the sensor are connected.

You may find it helpful to know that:

This manual was written by David M. Harrison, Dept. of Physics, Univ. of Toronto in October 2008.